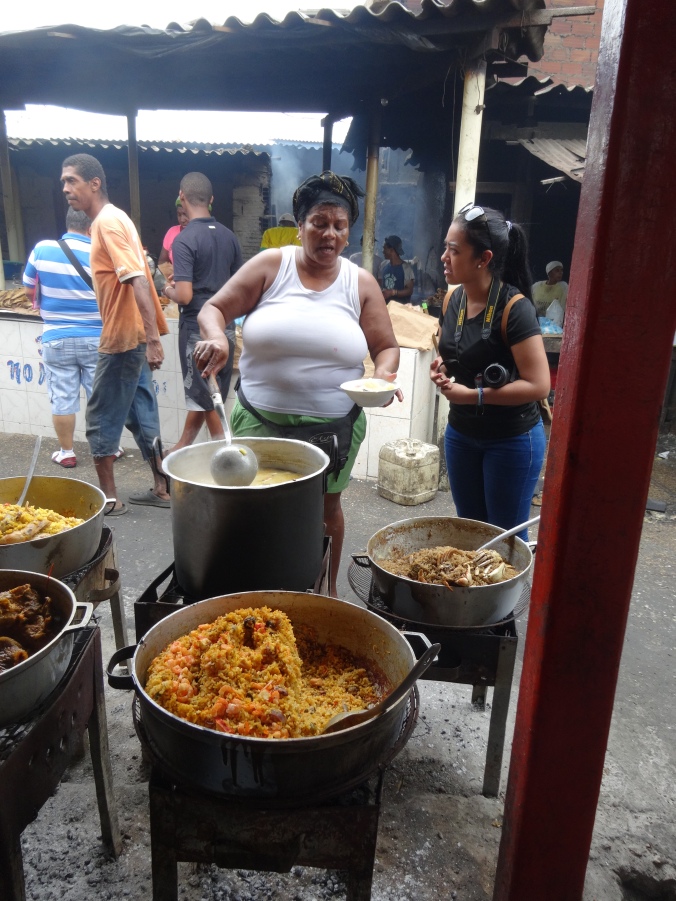 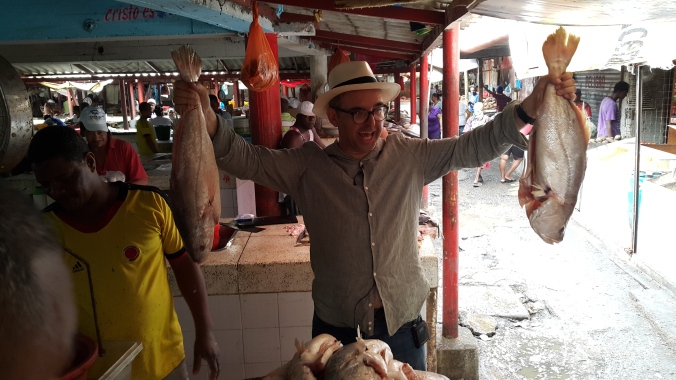 During the scenario production at the Summer School for the market in Barranquilla, we kept asking ourselves: How to deal with „informality“ and the thousands of informal workers in Barranquilla’s downtown? And who actually are these people to whom we refer as “informals”?

In the course of an elective class at ETH we decided to further pursue this term.

We started working with the assumption that the term of informality was a precisely defined concept. Following the ILO report, the focus of our work was to find a way to formalize informal working relationships. But once we started reflecting about the informal economy and compared the situation of Barranquilla’s market to other markets worldwide, Mörtenbröck and Mooshammers’ theory (Informal Market Worlds, 2015), appeared to be much more plausible. The discussion about the informals in Barranquilla was guided by „the instrumental utilization of the concept of informality and the uses which different interest groups derive from it.“

In this sense, our paper is oriented to the different perceptions of informality depending on each stakeholder. We decided to focus on four stakeholder groups: governmental institutions, formal workers, informal workers and the „public opinion“. After describing these four perspectives, the conclusion is our own reflection about the divergent, sometimes oppositional perception of informality. Also, we argue that this vague concept is sometimes standing in the way of finding new solutions for Barranquilla’s market.

The paper doesn’t claim scientific correctness since most of our (qualitative) data available is too little or fragmentary. Rather, it is a critical reflection of our two weeks in Barranquilla and what we experienced. Here, again, we’d like to mention that you all are invited to contribute with quotes or experiences from these two weeks we spent together! 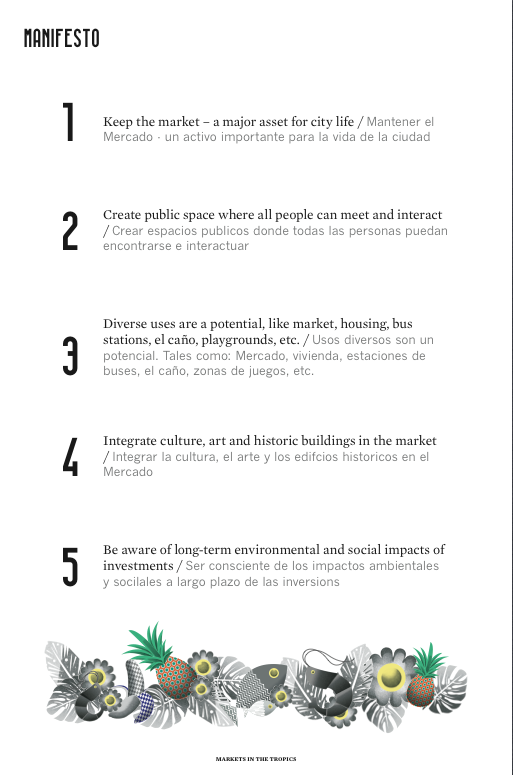 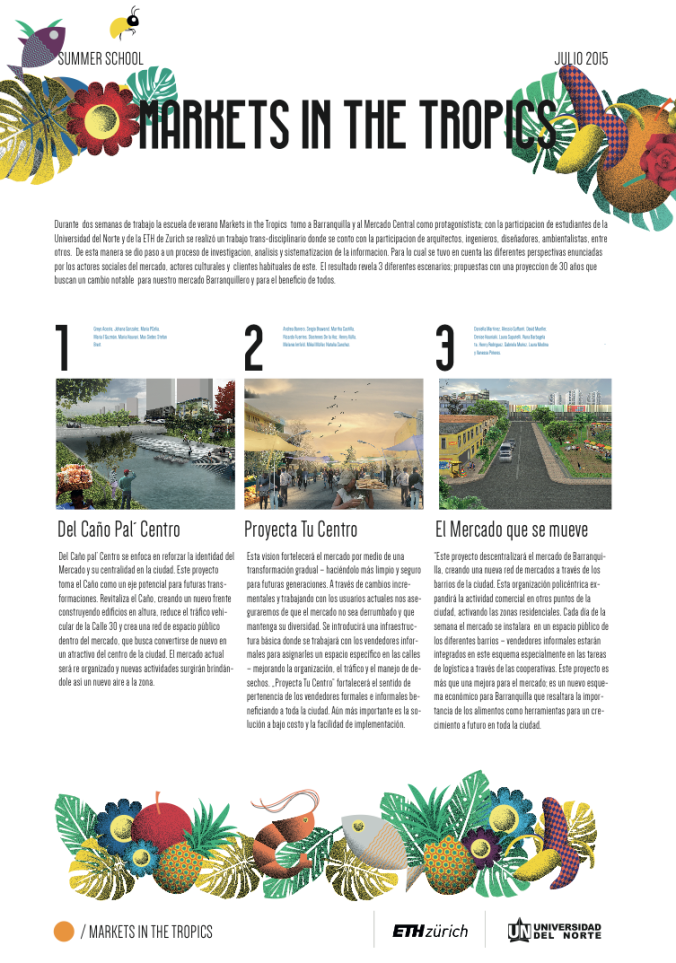 Our “Market in the Tropics” poster for the Event!

The summer school ended with a final visit to the central market on Friday evening where we distributed the produced newspaper. It was a special task for all of us to provide the market sellers with our  colorful product that was written and designed during the last days and nights.  We were not sure how the sellers would perceive our interpretation of “their” market  and also our disigned visions for the center of Barranquilla.

As soon as we started with the distribution of the newspaper in the market, all eyes were on us. Everyone wanted to know and especially see what we had to share!  Sellers and customers started flipping through the paper and recognized people and places on  the photographs. In some occasions the newspaper led to a gathering of people around it. People started to discuss and were impressed by our work.

Some of the people even asked us if we were the Swiss and Colombian students working in the market the last days. Especially a policeman recognized us and asked for several newspaper he wants to share at his police station.

The 100 newspaper we had with us were distributed within no time. On the way back  a feeling of great satisfaction came up inside us. We were able to give the people who helped and supported us during the last days something back. Our hard work had a real impact in the market system and was highly appreciated by the people living in the center. We could start a discussion between the authorities and the market people about the future of this flowering and colorful market in Barranquilla.

By Johana and Denise

We learned a lot, we interacted with local people, we worked with passion, we did our best to understand the market and propose valid scenarios for its future and the time has come to present the result of this process to those who can actually take us one step further, the decision makers. The meeting was held in the restaurant “1966” at UniNorte. Impatience and anxiety were in the air while we were preparing the poster exhibition. When everything was ready, the presentation started. The groups communicated very well their visions and they received an unexpected welcoming from the part of all the decision makers. The different scenarios generated an active discussion during which important aspects of the projects were pointed out and possible strategies for implementation were proposed. Our mission has been accomplished: we built a bridge between the stakeholders and the decision makers and we revealed the opportunities of the market and its importance as a strong element of the local identity. But most importantly we showed that the young people of the city really care for its problems and they are ready to defend their will for change. The night closed with a beautiful representation of Barranquilla’s carnival that transformed our discussion table into an original Caribbean fiesta. We dance with Marimondas, Negritras puloy and Joselito at the sound of Cumbia, Garabato and “la pollera colora”. The culture of Barranquilla carried us away. 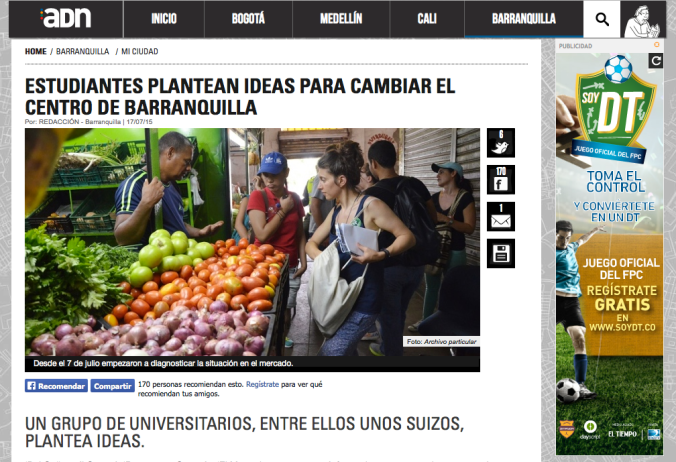 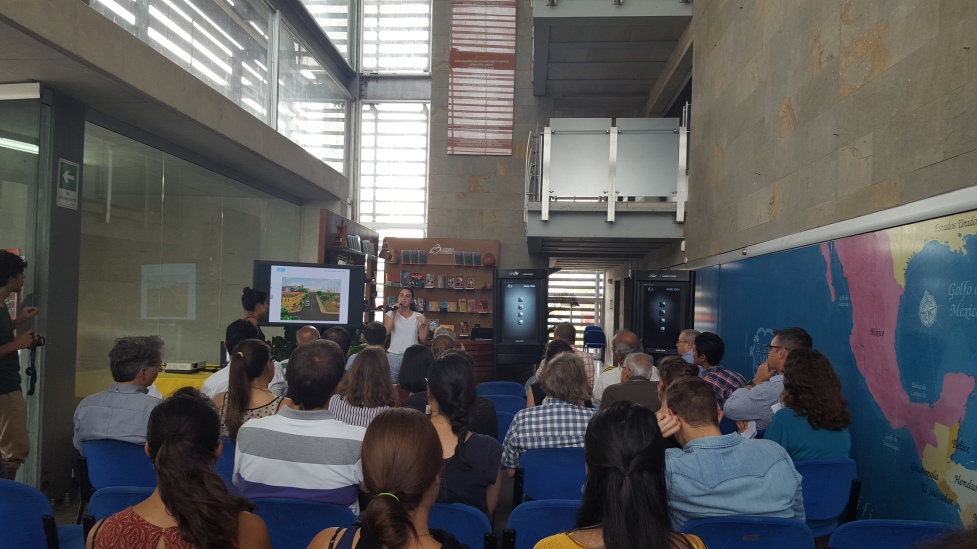 There is no better feedback for our work than the one from people living and working in the market. That was certainly what we experienced yesterday. We got to get a whole new perspective on what our projects meant to them. It was a gathering of valuable information exchange that consisted of a mutual benefit. The idea of this first presentation was precisely to comprehend any weak and strong points in our visions, for these would be the arguments with which we will approach further actors. It’s less about selling the scenario and more about implanting a vision in peoples’ minds. Another important point is that this becomes a perfect space to attract educative initiatives and promote this idea planning on crucial areas of the city. So, in conclusion this for us was a very rich experience both for promoting these type of projects in the city and transcend their development, and for enriching our knowledge on subjects to improve our interventions and visions. 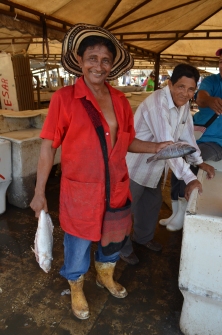 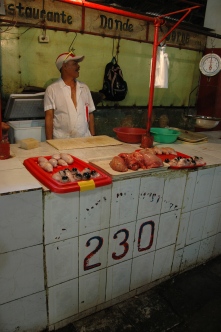 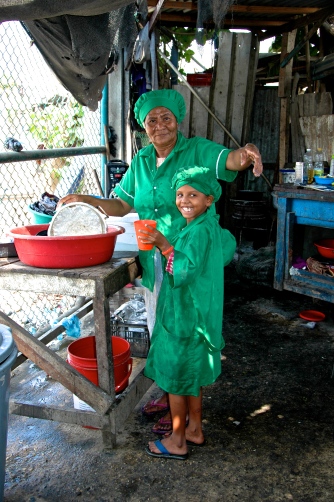